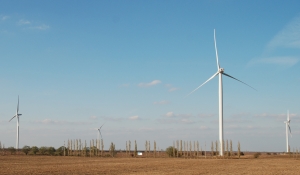 In 2015 all wind power plants (WPP) located in the mainland Ukraine generated 1 125.0 mln kWh of electricity.

16.6 MW were added in 2015, out of which four wind turbines FL 2500-100 were installed at Ochakovskiy wind park in Nikolaev region and two wind turbines Vestas V-112 – at WPP Staryi Sambir 1 in Lvov region. Thus, as of December 31, 2015 cumulative installed wind capacity reached 426,2 MW in the mainland Ukraine. All wind turbines are connected to the grid.

Currently two wind power plants are located on the uncontrolled territory of Ukraine - Lutiginsliy and Krasnodonskiy wind parks (Lugansk region), while Novoazovskiy wind park region is located on the line of collision in Donetsk region. The further previously planned development of these WPPs has been suspended. The legal proceedings regarding the status of these wind farms are taking place.

The main barriers hindering the further development of the national wind industry and worsening the investment climate in the country:

At the same time last year changes in the Ukrainian wind sector should be considered as positive: