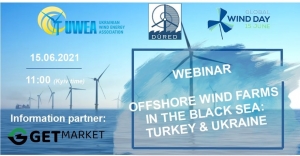 Ukraine and Turkey have considerable and still unexploited technical potential of offshore wind energy. According to the World Bank, the technical potential of offshore wind power in the Black Sea basin reaches 435 GW, 70 GW of which accounts for Turkish maritime territory. Ukraine, in turn, is a country which not only possesses half of this total technical capacity (251 GW) but also has an additional and significant potential in its shallow water. In addition,  Ukraine considers offshore wind technologies as a basis for “green” hydrogen production.

Within the two sessions of the webinar, the speakers covered a wide range of issues: from the current status of global offshore wind power and wind potential of the Black Sea to the prospects for local manufacture of offshore wind turbines and floating wind farms as well as the readiness of national legislations for launching new markets.

Murat Durak, Chairman of the Turkish Offshore Wind Energy Association: “Manufacture of offshore wind turbines and foundations, shipping and appropriate infrastructure capacities should be local as much as possible. Lots of EU countries today have a clear vision for the development of offshore wind, so Ukraine and Turkey, as countries of the Black Sea region, should follow the leading countries and set their national targets for offshore wind.”

Andriy Konechenkov, Chairman of the Ukrainian Wind Energy Association: “Ukraine and Turkey are those countries of the Black Sea region that have considerable natural and technical potential for offshore wind projects. In contrast to Turkey, which has already implemented concrete practical and technical steps towards offshore wind development, a discussion on the prospects for its offshore wind has only been initiated in Ukraine by our association. I am convinced that today's webinar, which we conduct on Global Wind Day, will become a kick-off event for further internal work on the development of offshore wind energy in our countries.”

During the second session of the webinar, dedicated to the technical potential of offshore wind power in Ukraine, Kateryna Knysh, Head of the UWEA’s Analytical Department, who also acted as a moderator, highlighted the current status of the Ukraine’s power sector and presented already existing UWEA’s efforts in this regard, such as the White Paper on Offshore Wind Power and “Green” Hydrogen, developed in collaboration with law firm Asters, Ukrainian Hydrogen Council and Institute of Renewable Energy of the National Academy of Sciences of Ukraine. “Nowadays the offshore wind power demonstrates all its technical and social benefits: from reducing greenhouse gas emissions, creating new jobs to replacing fossil fuel power plants and increasing countries' independence from imported fuels. Offshore wind in combination with “green” hydrogen are the most attractive solution for greening, modernizing and balancing modern Ukraine’s power system,” Mrs. Kateryna summarized.

Marta Halabala, Senior Associate at Asters Law Firm, which is the UWEA’s member company, described all legislative and administrative changes and initiatives that should be implemented in Ukraine.

An interesting presentation was given by Maxym Ganzha, Offshore Wind Farm Project Manager at Vuglesyntezgaz, a subsidiary of the Naftogaz Ukraine. Mr. Maxym presented the technical and infrastructural capacities available in Ukraine for the construction and grid connection of the potential offshore wind power plants. He stressed that Ukraine has sufficient resources for the development of national manufacture, such as manufacture of foundations for offshore wind farms.

In her presentation regarding the importance of hydrogen technologies for Ukraine, Anastasiya Kudrya, the representative of Ukrainian Hydrogen Council, focused on  possibilities of “green” hydrogen production in Ukraine, revealed the full range of benefits of such technology and the role of offshore wind in this process.

The discussion between the experts and the participants of the event demonstrated that Ukraine has significant potential for the development of offshore wind energy and that this market will definitely bring significant economic and social benefits for the country. Instead, the development of offshore wind market is impossible until all legislative (including the adoption of support system) and infrastructural issues (including the lack of vessel fleet) have been resolved.

Recording of the webinar: https://www.youtube.com/watch?v=Fww4Kcgcm3A&t=1033s