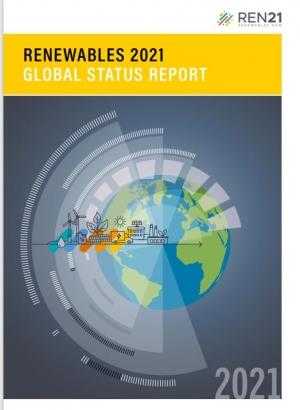 MAKE RENEWABLES A KEY PERFORMANCE INDICATOR IN ALL ECONOMIC ACTIVITIES

On Global Wind Day, June 15,2021, an international policy network REN21 presented its annual Renewables 2021 Global Status Report, which is an annual stock-take of the global transition to renewable energy.

2020 could have been a gamechanger. Economies worldwide were ravaged by the COVID-19 pandemic. Primary energy demand fell by 4%, resulting in a 5.8% drop in global energy-related carbon dioxide (CO2) emissions – the largest percentage decrease since World War II. But even with this historic decline, G20 countries, the planet’s biggest polluters, barely met or even missed their renewable energy targets. But the benefits of renewables in terms of health, climate and job creation are indisputable. REN21’s Renewables 2021 Global Status Report shows that we are nowhere near the necessary paradigm shift towards a clean, healthier and more equitable energy future.

The power sector has made great progress already. Almost all new power capacities commissioned in 2020 is renewable. More than 256 GW were added globally last year, the largest ever increase, of which a record 93 GW of wind power capacity - including more than 86.9 GW onshore, the highest yet, and nearly 6.1 GW offshore. Continuing a trend dating back to 2012, net additions of renewable power generation capacity outpaced net installations of both fossil fuel and nuclear power capacity combined. In more and more regions, including parts of China, the EU, India and the United States, it is now cheaper to build new wind or solar PV plants than to operate existing coal-fired power plants. This progress could and should be replicated in all other sectors.

Though renewable energy reached a record share in 2020 – an estimated 29% of the global electricity mix. In turn, the share of fossil fuels in the total energy mix remains as high as a decade ago (80.3% vs. 80.2% today) and has not decreased for 10th consecutive year.

COVID-19 economic recovery packages include significant spending to stimulate further investment in renewables. Around 7% of the USD 732.5 billion total announced by 31 governments to support all types of energy was allocated directly to policies favoring the production or consumption of renewables. On the other hand, recovery packages pour money into the brown economy despite advantages of renewables, as renewable energy investments in COVID-19 recovery packages were nearly six times less than those for fossil fuels.

Shifting to renewable energy is not only necessary and possible, but it also makes business sense. Global new investment in renewable power and fuels (without hydropower projects larger than 50 MW) totaled USD 303.5 billion in 2020 up 2% from 2019. Such investments continued to focus on wind and solar power, with solar representing nearly half of global renewable energy investment in 2020, at USD 148.6 billion (up 12%), though except solar power, Investments fell in all renewable technologies with wind power falling 6% to USD 142.7 billion (47% of the total).

Moreover, from the second half of 2019 to the same period in 2020, the global benchmark levelized cost of energy (LCOE) from new wind power projects fell 17% onshore (to an average USD 41 per MWh) and 1% offshore (USD 79 per MWh). As a result, global capital expenditures committed to offshore wind power in 2020 surpassed investments in offshore oil and gas.

REN21’s 2021 report clearly shows that governments need to give a much harder push to renewables in all sectors. The window of opportunity is closing unless efforts are significantly ramped up, and it will not be easy to do.

“Governments must not only provide greater support for renewables but also decommission fossil fuel capacity. A good way to accelerate development is to make the uptake of renewable energy a key performance indicator for every economic activity, every budget and every single public purchase. Thus, every ministry should have short- and long-term targets and plans to shift to renewable energy coupled with clear end-dates for fossil fuels,” says Rana Adib, REN21’s Executive Director.

For many years already the Ukrainian Wind Energy Association has been one of the country contributors to the Report REN 21, providing information on RES development in Ukraine.